TEEPUBLIC Shop open! #teepublic #teepublicshirts #squishthefish
Social-distancing? Grab a copy of “Squish the Fish: A Tale of Dating and Debauchery” (link in profile) #socialdistancing
No fish down in Antarctica but we still squished ‘em! #squishthefish #antarctica #iceberg #billsmafiatravels
I just hiked up a big-ass mountain singing “Hey, ay, ay, ay! Let’s go Buffalo!” Am I crazy? I think not. #patagonia #billsmakemewannashout #buffalobills #billsmafia
Buffalo vs Everybody! #buffalovseverybody
In Antarctica while “Squish the Fish” is read aloud by a Russian comrade. #antarctica #squishthefish #comrade #whiskey
Follow Dave Lundy on WordPress.com

This excerpt is from the beginning of “Squish the Fish: A Tale of Dating and Debauchery” by Dave Lundy. The bestselling novel has won numerous comedic awards and been called “The Hangover” in Buffalo, NY.

Trapped like a turtle flipped on its shell, a man flails his limbs through the puffy snow. As he passes out, the alcohol in his bloodstream celebrates with wildly inappropriate dance-moves inspired by the night’s sins. The glow from a streetlamp punctures the darkness like a police helicopter’s spotlight and frames the helpless fool in his jagged snow-angel.

A few hours later, at dawn, an elderly woman is walking her Saint Bernard down the quiet street when she notices the collapsed body. Her first thought — What the fuck? — naturally is filled with compassion. But after she reminds herself of one critical detail, it all makes sense — This is Buffalo… of course there’s a drunk jackass lying in the snow. As she shrugs-off the aspiring Darwin Award winner, an alluring scent pulls the dog in the man’s direction. Tearing the leash from its master’s grasp, it dashes to investigate. 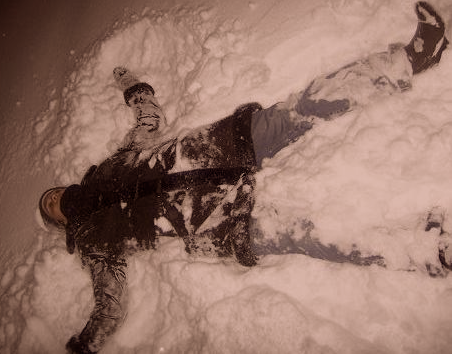 Now above the lush, the shaggy beast pants and stares in wonder. Masked by a pair of pink cotton panties, the man looks like some sort of deranged bank robber. If the dog could form complex thoughts, it might speculate — For what ungodly reason is he wearing that? Is it a desperate attempt to prevent his face from freezing off? Perhaps it’s a provocative fashion statement? Or is it, quite possibly, some next-level form of perversion? But it can’t contemplate such things, so it just wags its tail in blissful ignorance. Incapable of resisting the undergarment’s exotic aroma, the hound licks the guy’s noggin like it’s a lollipop. The mutt’s tongue bursts with flavor and knows it’s struck gold — tangy, delicious gold.

Nearby, a fresh line of boot-prints mark a path up to the man and continue past him. “SUN 7:16 AM” displays on the frosty LCD of his Casio watch. Gusts of wind blow across the ground, fusing his bare hand with a frozen bottle of Genesee Cream Ale. In his other hand, a tattered envelope labeled “Buffalo Tickets” flaps and scatters a rainbow of glitter dust into the air.

The slobbering dog belongs to a breed known for saving people buried in snowstorms, however, this pooch’s glowing eyes foretell that a rescue is far from how things are about to go down. The inebriated fellow, unaware that his forehead is the soon-to-be target of an amorous assault, remains oblivious when the canine launches into its grand-finale. The funny thing is (which can only be said when you’re not on the receiving end of such an act) humiliations such as this can’t compare with what the city has endured throughout its outlandish history.

As the animal’s pleasure-romp reaches a fever pitch, its owner strolls into the spectacle like it’s nothing out of the ordinary. While reaching for the leash, she halts abruptly and scratches her scalp. Anger builds as she reads a urine scribbled message in the snow that audaciously proclaims “GOD HATES BUF…” and trails off into a wavy drizzle.

Now in control of the tether, the old woman gives it a harsh tug. While dragging her pet away, she reflects for a moment and mutters to herself, “Is that clown, right? Does God hate Buffalo?”

Copyright © 2017 by Bottoms Up Publishing. All rights reserved.